To Louise and all of Kevin’s family; the privilege that has been given to his industry colleagues, far too numerous to mention, some are here, to be part of this Service for Kevin is gratefully acknowledged.

A few of us, such as Bob McKay, Denis Sullivan, David Slingsby, myself and some others had an association with Kevin going back to his DMR days in 1971, 50 years ago. A history of his professional life is being assembled and will be presented to the family.

Kevin graduated with 1st Class Honours from UNSW and then a Masters Degree at the same University. He later obtained an MBA degree from Macquarie University. He was always destined for great things.

He worked in both public and private sectors including Hornibrook and Pioneer Concrete. In the early 1970s he was an Engineer at the old DMR at its Offices at Thornleigh, Windsor and Holbrook. He later worked in the Engineers Branch of the Housing Commission. He was NSW Regional Engineer with the Cement and Concrete Association from 1985 to 1992. In 1994 he worked with Geoff Ayton at RTA to write the Concrete Roundabout Design Manual that remains the definitive text on that subject.

After being National General Manager for BST Australia, in 1994 he formed Abrams Marketing to market and distribute Lightweight Concrete Aggregate and other products and marketing services to the concrete construction industry.

When the Australian Society for Concrete Pavements was formed in 2007 he was the logical choice for Executive Director, a position he held continuously with distinction for 13 years until his passing. He led from the front providing both direction and mentoring. Through his efforts ASCP now has strong links to similar international bodies in USA and Europe and the Centre for Pavement Engineering Education based in Melbourne.

Between 2006 and 2016 Kevin provided a secretariat service for the Post-Tensioning Institute of Australia.

But it is Kevin’s association with the Concrete Institute of Australia where he arguably made his biggest impact. For that we are indebted to a catalogue of information on him provided by the Institute CEO David Millar and Honorary Member John Woodside.

He was Conference Secretary and then Chairman of the Organising Committees for the 1991 and 1999 Biennial Conferences in Sydney.

Kevin served as Convenor of the Membership Committee for twelve years with a huge influence on Institute membership benefits and activities.

I can do no better than the following quotes from David Millar in describing Kevin, the man.

“ Kevin championed the Awards for Excellence in Concrete for nearly two decades. As convenor of the Recognition of Excellence portfolio for well over 10 years he championed excellence and emphasis on adding prestige to the Institute’s Life & Honorary Memberships, and National Engineering Bursary. From 2019 he served as Chair of the judging panel for Awards for Excellence in Concrete. Through Kevin’s personal drive these are now recognised nationally, within the Institute and industry.”

“ After being made a Life Member of the Concrete Institute of Australia in 2005 he continued with the same passion and enthusiasm he had from day one.”

“Kevin has a wonderful way of embracing our history with a view to the future, balancing experience with change, and bringing together the old with the new. There is no-one who embodies the essence of the Concrete Institute of Australia more, nor better served to lead the CIA’s Golden Jubilee celebrations in 2020.”

Some other words submitted by colleagues;

He was a Member of a lunch group of former DMR concrete “old comrades” set up by the late Ed Haber that meets a few times each year to solve the world’s problems and to hear of Kevin’s latest exploits in cooking and at his bridge club, and his current preferred Scotch.

To Louise and Kevin’s other family members all that remains for me to say on behalf of all his industry comrades and associates is that this country is a far, far, better place for Kevin having walked upon it. 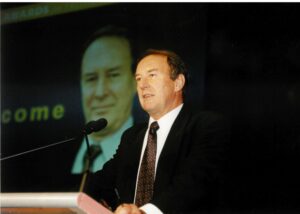